In the second part of our exclusive interview, Dr. Terence Sanger discusses the ambitions that drive him, the advice he always gives his medical students and why his patients inspire him every day

A renowned neurologist and research scientist, Dr. Terence Sanger MD, PhD is is vice president for research and chief scientific officer at Children’s Hospital of Orange County (CHOC). He attended Harvard Medical School and completed his medical internship and residency training in pediatrics at the USC/Los Angeles County Medical Center.

He is also currently Professor of Electrical Engineering at the University of California Irvine (UCI), Vice Chair of Research, Pediatrics, (UCI) and Director of the Pediatric Movement Disorders Clinic and Deep Brain Stimulation Program at CHOC.

I have a lot of interests and tend to work on different projects and take them just far enough. Like, ‘Okay this is good, other people should be able to do this now.’ But the reality is that other people don’t, so you end up with what appears to be a lot of half finished projects. I would finish my part of it but there was never any continuation so my advice to myself would be pick one thing and carry it to completion – even when other things look interesting. It’s like being in the middle of a candy store. Don’t be distracted! Keep working on the thing you’re working on and keep pushing it. Going deep in one area is better than going shallow in ten.

What keeps you awake at night

I worry about my child patients. I work with children with movement disorders and I’m focusing on kids who are really severely impaired. They have a variety of very different and very difficult problems but they are delightful children with the most incredible power and drive. When they come in, I’ve never seen such drive and willpower in them and their parents. A mother with three multiple-handicapped children who takes the bus to be at her appointment. And the kids are dressed immaculately and the bows in the hair are perfect and I’m like, ‘I don’t even know how you did that’. So at night, I’m always thinking ‘Is there a part of their lives I can make better? Did I miss something? What don’t I know?’ Working with these kids is so powerful. When you see them in clinic it’s so uplifting and I love them. But I can’t do what I want to do, which is free them from my clinic and make myself irrelevant in their lives. That’s what keeps me awake.

I try not to feel guilty about it but I love music – orchestral music, country, rock or salsa. I’m learning the piano and the harmonica which is a great use of time. I’m also a big fan of dancing in general so I love doing the Argentine tango and I love listening to the music of it. It’s truly a passionate culture and a passionate music has emerged from it.

The importance of respect. And the craving for respect which is very important to people. Respect, to me, is believing in the choices someone else makes even if you would not have made that choice. This is important in medicine – we function in teams and people might do things differently so you have to respect their reasons for doing it rather than trying to build yourself up by saying, ‘Well I wouldn’t have done it that way.’ It’s synonymous with humility and recognising that we are not as smart as the natural world. We make models and we make inferences and predictions and they’re almost always wrong. But it’s the best we can do. So keep doing that.

But the minute you start to believe you’re right and you have the answer, Mother Nature does not respect that and she loves to put people in their place. So when you think you know what’s wrong with a patient, great. Write it down, put it to one side. Now, what are the six other things it could be? I teach that to my medical students. You have to respect disease, respect biology and respect the mom who says there’s something wrong with my child even though the child looks perfectly fine. If that mum says there’s something wrong and she has three other healthy looking children, you call the intensive care unit.

Who do you most admire?

I admire people who face and overcome challenges with a smile. So that’s pretty much every single patient I see. When I see these kids and what they struggle with every day – to move, to speak to function – they are amazing and incredibly inspiring. I have kids whose dream is to be a runner or a tennis player and they’ve got cerebral palsy and you watch them fight and fight and they do it!

When I was at USC, we asked a bunch of coaches from the Special Olympics, what the most important thing for coaching was. And they all said, ‘It’s drive.’ We said, ‘What about motor learning, visualisation, equipment, wearable technology?’ They all said, ‘Nah. That’s nice but it’s about drive, persistence and being committed. Every time you fall, you need to get back up.’ And that’s so true. We don’t fall very much. People who are healthy don’t spend a lot of time falling. But if you have cerebral palsy, you’re falling every single day and you have to get back up. If I was in their position would I have that strength? I honestly don’t know so this is what I admire. The kid who comes in to the clinic every week with his track times. He’s beating me! The girl who brings in her violin to show me how well she’s playing and it sounds great. I know how hard they’re working and the effort involved. It’s huge and powerful and we have a lot to learn from our patients.

When I was 2 or 3, I fell in love with a statue of a cat I saw in the window of a New York store. I saw it every day, so eventually my father bought it. It’s made of porcelain and I’d often fall and it would break into hundreds of pieces. But my father would glue it back together. Next week it would happen again and my father would glue it again. About 15 years ago, he gave me that cat as a present. And you can see every little glue line, but remarkably, there are few missing pieces. I have it on my shelf in my office and it’s testament to a father’s love and for that it’s beautiful. But it’s also symbolic of putting broken things back together. That’s very powerful for me. No matter how broken this thing is, if you take your time and you pay attention and you have enough glue, you can put it back together again. So that’s a really prized possession.

Oh everything! Many years ago Terry Sejnowski asked me what I wanted to do with my life and I said I wanted to cure dystonia. And he replied, ‘Is that enough?’ I still hear him asking me that all the time. I realise now that it isn’t enough. Sure, curing dystonia would be huge. It’s a horrible disease that a lot of children suffer from and I’d love to get rid of it. It’s fascinating from a robotic control point of view. Curing it is going to involve pulling many different theoretical and medical fields together and I’d like to believe I’ve made a small amount of progress on it. But to me, it’s all about learning and progression. So it’s all about what happens after that. Let’s get back up. Let’s keep pushing.

Dr. Terry Sanger will be speaking on both days at AIMed’s virtual multi-track CME-accredited event, ‘Surgery, ICU and Neurosciences’ on 30th and 31st March.

Part one of this wide-ranging interview can be read here 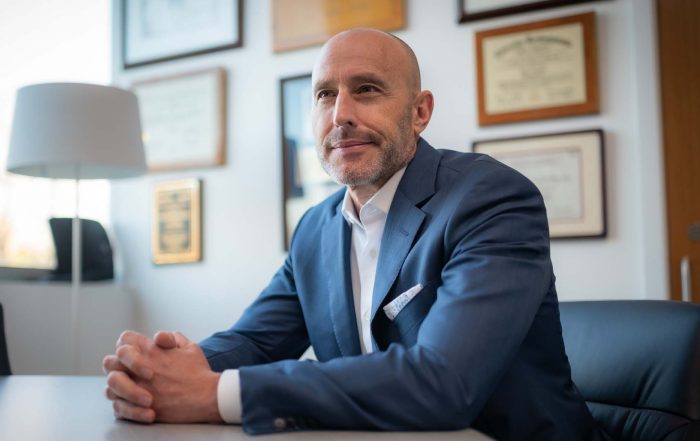 The possibilities are limitless … if we get it right