The continuum of cloud: from computing to medicine

Dr Timothy Chou, a Stanford lecturer and one of only six people to hold the title of President at Oracle, gives a class in cloud and its potential to transform healthcare

You have to be living under a rock not to have heard about cloud computing.

I was talking with one of my friends who works at Google Cloud and it reminded me many people think the measurement of success of the cloud is how many applications have been migrated to the cloud, something people have called lift & shift.

While having your CIO get rid of a data center and reduce the cost of compute is a good thing, it’s a red herring.  The rise of compute & storage cloud services is NOT about migration.

If you go back to the 90s, when some of my Stanford students weren’t even born yet, the major technological shift was the move to client/server. New companies like Microsoft, Oracle, Dell, EMC, Sun were all emerging and growing much faster than the previous generation of companies like Tandem, Data General, Prime, IBM, DEC.

Why? Was it enterprises migrating applications to these new client/server platforms? No. In fact most of those migrations were a dismal failure. Instead it was about building new applications for HR, ERP, CRM, purchasing, eCommerce.

And why were they being built on these new client/server platforms? Was it because the technology was superior? Again, no. So why? Economics. Microsoft, Oracle, Dell, EMC, Sun all provided significantly lower cost computing than the established suppliers.

Lower cost alternatives brought with them programmers who could now afford to buy a PC and program in Visual Basic. And the rest as they say is history.

So, what does this mean for the rise of compute & storage cloud computing?

Again, it is NOT about migration, NOT about lift and shift. Instead it will be new applications enabled by significantly lower cost computing.

And it’s not the cost of the box we’re talking about. That’s not the true cost of computing; instead it’s the cost of managing the security, availability, performance and change of the compute and storage. In the on-premises world this is largely done with expensive error-prone human labor. In the cloud all the cloud service providers have invested in high degrees of automation to manage the availability, security, performance and change. And remember computers are much cheaper and less error prone than us humans.

In the early days of AWS, the Amazon team offered me $3000 worth of AWS time for a class on cloud computing I started at Tsinghua University. I told the class $3000 would buy you a server in Northern CA, Virginia or Ireland for 3 1/2 years. Most of them yawned and I could tell they all thought, so what, I can buy a server and put it underneath my desk in Beijing for 3 1/2 years. And then I said $3000 would also buy you 10,000 servers for 30 minutes.  Now no one has ever been able to give you 10,000 servers for 30 minutes for $3,000 and it’s this economic advantage that will lead to entirely new applications.

The cloud has also brought low cost, high availability storage. Today as a consumer you can easily buy 4TB of storage for $100 so it’s not hard to imagine a world where cloud storage is essentially free.

So, what will cloud computing & storage enable us to do? What will we be able to learn from vast amounts of data?

Jeff Dean, of Google Brain shows a graph in one of his talks, which argues at this point in time if we put more compute and more data to work, neural networks will become increasingly accurate at the tasks we’re training them to do.

As an example, consider the widely publicized ImageNet competition, which is designed to have computers compete against humans in image recognition. In the first contest in 2011 the machines could only be 75% accurate versus humans who were 95% accurate. In just four years machines hit 97% accuracy.

While today as consumers we see some of the fruit of this in translation (Google Translate), speech recognition (Alexa), or image recognition (Facebook), we are just at the very beginning of enterprise applications that promise to transform financial services, transportation, construction, agriculture, oil, gas, the cities we live in and medicine.

So, what does this mean for the future of medicine?

First, we should recognize there is way more information in the healthcare machines (MRI scanners, blood analyzers, drug infusion pumps, etc.) than in the EMR or EHR applications.

An average size pediatric hospital has over 1,000 machines yet unfortunately few are connected.

The consumer Internet transformed our world when 1,000,000 machines were connected. Imagine if we connected all the healthcare machines in all the pediatric hospitals in the world: we’d be halfway to another transformational change with 500,000 machines connected.

A vertical Internet of healthcare machines would also enable doctors and specialists from around the world to collaborate. This would certainly be the foundation of healthcare in the developing world.

Moreover, as we have already discussed, with cloud computing’s ability to bring low cost compute & storage we can bring modern AI/neural networks software to healthcare.

Rather than depending on the data from a single patient studied by a single specialist, we will be able to use data from 10,000+ patients on 10,000+ machines leveraging the expertise of 10,000+ specialists.

Will this guarantee a drastically better experience for each individual patient in the healthcare system? At this point we can only speculate, but if you consider the difference between the PC user’s experience 10 years ago versus today then it’s hard not to be excited by the possibilities.

This article originally appeared in AIMed Magazine issue 04, which you can read here. 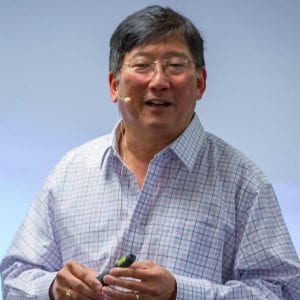 Tim has been lucky enough to have a career spanning academia, successful (and not so successful) startups and large corporations. He was one of only six people to ever hold the President title at Oracle. As President of Oracle On Demand he led the cloud business from it’s very beginning. Today the Oracle cloud business is over $2B. He wrote about the move of applications to the cloud in 2004 in his first book, “The End of Software”. Today he serves on the board of Blackbaud, a $600M vertical application cloud service provider.

After earning his PhD in Electrical Engineering at the University of Illinois he went to work for one of the original Silicon Valley startups. Had he understood stock options he would have joined earlier. He’s invested in and been a contributor to a number of other startups, some you’ve heard of like Webex, and others you’ve never heard of but were sold to companies like Cisco and Oracle. Today he has invested in several new ventures in cloud computing, big data, machine and the Internet of Things.

Finally, he was lucky enough to be able to start teaching at Stanford University in 1982. He taught introductory computer architecture for fifteen years and only stopped because one day he had to fly to Bali, do a sales kickoff and fly back in 24 hours to teach class. Since leaving Oracle he launched Stanford’s first course on cloud computing. He also has delivered keynote speeches on all six continents, most recently for Telefonica in Mexico City. He has also recently published a 3-volume book on cloud computing and co-authored a paper for the Journal of the American Medical Association.