In the spirit of scientific experimentation, Crystal Valentine, PhD, investigated whether she could influence more young women to study computer science.

Note: I choose to focus on gender diversity here because the underrepresentation of women in scientific fields is the most glaring given that women represent approximately 50% of the population overall. However, the lessons I share here can likely be extended to address other dimensions of diversity as well.

Today, in 2018, we have the benefit of awareness and understanding. Not only are we aware of the gender imbalance in our field and the problem it implies, but we also have good evidence to explain the root causes of this gap.

It’s been over a decade since Larry Summers famously questioned whether the relatively few women in top positions in science might be attributed to “issues of intrinsic aptitude.” Today we can look to scientific evidence [1,2], which shows that proficiency in science and math is a result of interest and motivation – not innate talent. Researchers have explained that motivation and how the discipline is perceived by a student accounts for his or her performance in the field and whether he or she decides to pursue it as a career.

My field of training, computer science, is arguably one of the least attractive fields as perceived by young women.  According to studies by researchers at Carnegie Mellon University [3], there are three main perceptions of computer science that cause female students to steer clear.

In short, college-age women opt out of a major in computer science because of perceptions that:

I have heard many of my contemporaries argue that the reasons for the gender gap in technology and science is insidious and systematic gender discrimination and the proverbial glass ceiling. While there is no doubt that discrimination and bias exist and can have deleterious effects on the margin, the research shows it is instead these three perceptions of computer science that form the major barrier to entry for young women [4] which then negatively impacts the size of the pipeline and then compounds as women progress to more senior levels.

If, as the research suggests, perceptions of a discipline will strongly influence a young woman’s decision of whether to pursue that field of study and, in turn, her motivation and success in that career path, then the challenge for our community is to address those perceptions.

My strong belief is that if we engage young students in new ways that challenge existing preconceptions, then we can materially impact the number of women who matriculate into those fields upon graduation from college.

My experience working with students is based on the two years I spent as a tenure-track professor in the department of computer science at Amherst College. I had the honor of working with colleagues who were truly invested in the development of our students and who were intellectually curious about what we could do to impact the gender gap in our field.

When I arrived at Amherst in the fall of 2014, the representation of women in the computer science department was low; only 40% of the students enrolled in the 100-level introductory course were women, and attrition meant that less than 30% of the graduating seniors were women.

While these numbers were much higher than the national averages, we acknowledged that we ought to aim for a 50/50 ratio in our department to mirror the gender ratio of the student body overall.

By studying the research out of Carnegie Mellon on the three problematic perceptions of computer science among young people, we developed a three-pronged approach to combat each of those three perceptions, respectively.

First, we implemented streamlining within our intro-level courses. That is, we required students in the 100-level course to be “true beginners” with no prior computer science or programming knowledge or coursework; students with prior experience would instead go straight into a 200-level course.

The impact of streamlining is particularly important in science and math classes where a more advanced classmate can make you feel as if you are already behind on the very first day. At some universities, especially technical ones, the theory is that a student without prior experience in computer science lacks an inherent curiosity in the field and will likely not go on to major in it. Therefore, the introductory classes at many universities are taken largely by students who have already had some coursework in that field during high school.

In reality, many students do not have access to a computer science curriculum in high school, so that conclusion does not necessarily hold. Additionally, as a professor, I made a point of sharing with my students that my first introduction to computer science and programming came in my first year of college when I was a true beginner. I then went on to major and then pursue a doctoral degree in CS.

By streamlining the students and providing equal opportunity to those with prior experience and the true beginners, the students in the intro classes were not intimidated by it being “too hard.”

Second, we redesigned the major programming assignments of multiple courses with a particular focus on the introductory course. The goal was, for each assignment, to provide the students with a range of options that would all serve to teach the same principles but that would showcase the breadth of application areas for the computer science skills they were learning.

For example, for one assignment in which the students were to practice iteration (i.e. programmatic loops), we gave the students four options: calculate the fare for a taxi ride based on a GPS trace, find gene-coding regions known as CpG islands within genomic sequences, infer the languages of tweets based on the frequency of bigrams in the words present, or compute various statistics from baseball play data.

Each option was roughly equivalent in complexity, but by providing the students with a choice, each student got to pick an application area that appealed to his/her interests. The students intuitively understood that computer science is not “boring” and has applications across problem domains.

Finally, we organized annual trips for a cohort of students to the Grace Hopper Celebration of Women in Computing (GHC), the largest gathering of women technologists in the world. The GHC attracts more than 10,000 attendees, largely female.

The women who attend represent the full spectrum of career stages and paths, with attendees ranging from undergraduate students to retirees, with career paths across academia, industry, and government. With dozens of concurrent talk tracks and ample networking and social activities, the students were exposed to a wide variety of cutting-edge areas of research, from virtual reality to forensic security, and became aware of the large number of women working in the field.

The students returned from the trip energized, excited about their futures as women computer scientists, and often with new friends. Critically, the students saw a huge number of female role models that reassured them that the computer science community is much more diverse than their preconceptions had led them to believe and that they could indeed thrive in CS careers.

A mere two years after we implemented these changes we saw a measurable impact. Remarkably, by the fall semester of 2016, women comprised more than 50% of the students who preregistered for every single class in the computer science department.

The plan we implemented at Amherst College was straightforward and represents a very pragmatic way to change perceptions of the field of computer science among young women who are evaluating potential career paths. I am confident that a similar approach would be effective in improving the number of young women who choose to work at the intersection of medicine and AI.

The takeaway for members of the A.I. Med community is that negative perceptions of our field are the main barriers to entry for young women, but there are concrete steps that we can take to change those perceptions that have been demonstrated to be effective.

It is my sincere hope that we all give some thought as to how we might make incremental improvements within each of our respective spheres of influence to ensure a strong future for our field.

This article first appeared in AIMed Magazine, which you can read here. 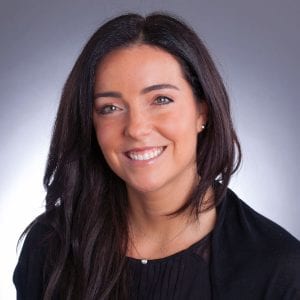 Crystal served as the VP of Technology Strategy at MapR Technologies for the past two years.  She has nearly two decades’ experience in big data and machine learning research and practice.  A former professor of computer science at Amherst College, she is the author of several academic publications in the areas of big data, algorithms, computational biology, and high-performance computing, and she holds a patent for Extreme Virtual Memory.  Dr. Valentine was named a Person to Watch in 2018 by Datanami and was awarded the Silver Stevie Award in 2017 for Female Executive of the Year in the computer software category.  She is a member of the Forbes Tech Council and is a frequent contributor to industry journals. Dr. Valentine was a Fulbright Scholar to Italy.