Keeping a watch on Parkinson’s disease 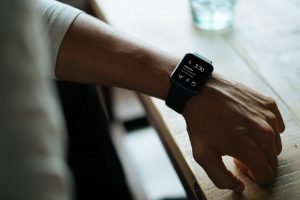 A team of engineers from Apple Inc. working with researchers from several institutions in the U.S. has found that smartwatches could provide a valuable resource in helping to track the progression of Parkinson’s disease in patients.

In the study, published in the journal Science Translational Medicine, an Apple Watch designed to remotely monitor fluctuations of resting tremor and dyskinesia in persons with Parkinson disease was shown to match in-clinic evaluations of these symptoms and capture symptom changes in response to treatment for 94% of participants.

Conducted by researchers at Apple, the study examined the efficacy of a new system called the Motor Fluctuations Monitor for Parkinson Disease (MM4PD) that uses the Apple Watch’s accelerometer and gyroscope data to continuously track changes in resting, tremor and dyskinesia.

The MM4PD system’s algorithms were developed using data from a pilot study including 118 participants with PD whose smartwatch data were matched to the gold standard by which motor symptoms of PD are measured, known as the Movement Disorder Society–Unified Parkinson’s Disease Rating Scale, or MDS-UPDRS Part III. Researchers recruited three movement disorder specialists to rate video recordings of participants, time-aligned with the smartwatch data, against the standard scoring.

In addition to the pilot study, researchers conducted a longitudinal study of 225 people with PD who were evaluated for up to 6 months. Participants’ measurement data were utilized to create symptom profiles that were then evaluated by the movement disorder specialists to see if the MM4PD system could identify symptom response to treatment changes and whether the system could be used as a decision support tool.

In their findings, MM4PD measurements correlated (as determined by r correlation coefficients) with in-clinic evaluations of tremor severity (r = 0.80) and mapped to expert ratings of dyskinesia presence (P < .001). Moreover, MM4PD was shown to capture symptom changes in response to treatment, known as ON and OFF that matched the clinician’s expectations in 94% of participants.

“In the remaining 6% of cases, symptom data from MM4PD identified opportunities to make improvements in pharmacologic strategy,” added researchers.

Speaking on the implications of the study findings, Michael Okun, MD, executive director at the Fixel Institute for Neurological Diseases at the University of Florida and national medical advisor for the Parkinson’s Foundation, noted that having the ability to use a commonly available device like an Apple Watch may provide clinicians with more transparency of patient symptoms throughout the day.

“The hope is that some of this technological innovation will help in the areas of better tracking medications, better tracking symptoms, and having more real-time control over this because it’s complicated,” said Okun. “And you’re hoping that these systems are going to make it easier both for persons with diseases like PD, but also for practitioners managing them.”

Researchers noted that FDA clearance may be necessary before MM4PD can be assessed in clinical trials.