The American College of Healthcare Trustees has become a key supporter of AIMed, with involvement in our virtual conferences for surgeons and healthcare executives. 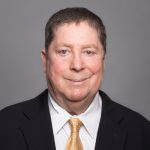 “AIMed is playing a pivotal societal role by advancing the understanding of artificial intelligence in medicine and healthcare. Anthony Chang and Alexis May and team are helping to break down silos among clinicians, data scientists, computational biologists, computer engineers, and visionaries of all stripes. It is only through such collaboration that the full promise of artificial intelligence can be deployed on behalf of patients and consumers wishing to maximize their health.”